25 kilos, 200 bullets and a mounted machine gun: this is the armed drone that will arrive in Turkey at the end of the year – FindNow

25 kilos, 200 bullets and a mounted machine gun: this is the armed drone that will arrive in Turkey at the end of the year 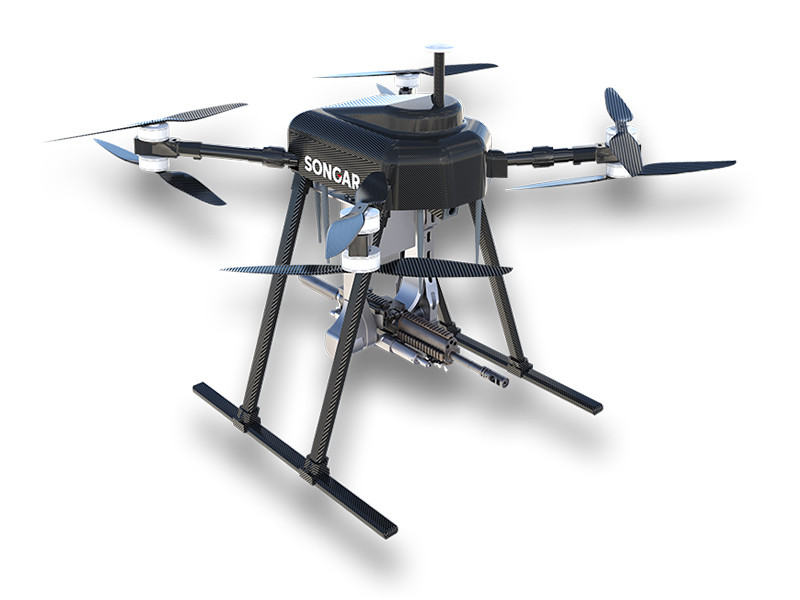 Turkey will be the first country to have an armed drone later this year, according to NewScientist . It is the Songar , a drone with a machine gun mounted in the lower zone manufactured by ASISGUARD, a Turkish company that develops defense systems . As stated on its own website , “its objective is to enter the inventories of the Turkish Armed Forces, the forces of order and other countries allied with the systems that are investigated, developed and manufactured with their own intelligentsia.”

The Songar is a drone with eight propellers (2×4) that weighs 25 kilos when fully loaded with ammunition. It uses 5.56 x 45 mm NATO-class bullets and, according to the manufacturer’s technical data sheet, is capable of firing up to fifteen rounds per second. Its operating range is up to 10 kilometers and it can fly up to 2.8 kilometers high.

If shooting video games have taught us anything, it’s that guns have recoil. When a gun is fired, the explosion produces vertical and horizontal movement that can deflect the trajectory of the bullets. In a drone, the recoil is even more evident , since it is suspended in the air. In addition, the drone must calculate the distance and the inclination to make an accurate shot.

The Songar is equipped with two systems that solve this problem. The first is that the machine gun placed in the lower zone is held by two robotic arms to compensate for movement deviations. The second is a set of cameras, sensors, and a laser rangefinder that it uses to calculate distance, wind speed, and angle of fire. In that sense, the barrel can be tilted up to 60 degrees.

According to the manufacturer, the drone is accurate enough to hit a 15-centimeter area from a distance of 200 meters . As explained in NewScientist, it is more than enough to hit a human from that distance. It will also depend on the skill of the pilot, since this is the one who controls the drone and must mark the target by placing a cursor on it. To do this, the drone mounts a camera with a 10x zoom.

The Songar has sensors that allow it to operate at night and is IP67 certified . It is equipped with GPS, GLONASS and connectivity, allowing it to transfer images in real time to users and record in memory for “damage assessment after shooting”. It can be swarmed, to the point where three drones can be controlled with a single controller and made to fire at the same target.

At the moment, the Songar is not an autonomous drone, since there has to be a pilot controlling it from a base, but the use of armed robots has generated debate due to the ethical implications that they imply. In 2015 we had the opportunity to speak with Ronald C. Arkin , professor at the Georgia Institute of Technology, and he showed us a positive vision of the use of these robots, since they could save lives and reduce the number of non-combatant casualties.

On the other hand, there are voices that advocate vetoing the introduction of robots in armed confrontations, although Arkin believes that it is not a question of eliminating them, but of making their implementation consistent with International Humanitarian Law . According to him, the arrival of lethal autonomous robots is inevitable, but it is necessary to discuss who is responsible for the war crimes that can be committed with these types of weapons.

“If the lives of non-combatants can be saved in that humanitarian effort, there would even be a moral imperative for their use. This seems to contradict the intention to directly veto lethal autonomous robots without first determining through research whether it could in fact be better achieved. protection for non-combatants “.

Contrary is the opinion of the Stop Killer Robots (SKR) campaign , which explains that although LAWs (Autonomous Lethal Weapons) require human authorization to open fire, “it would pose a fundamental challenge in the protection of civilians and compliance with international humanitarian and human rights law “They also emphasize that” allowing life or death decisions to be taken by machines crosses a fundamental moral line “due to a lack of judgment and ethics.

This is the current state of artificial intelligence worldwide, according to the AI ​​Index Report