Drones on the construction site – FindNow

Drones on the construction site 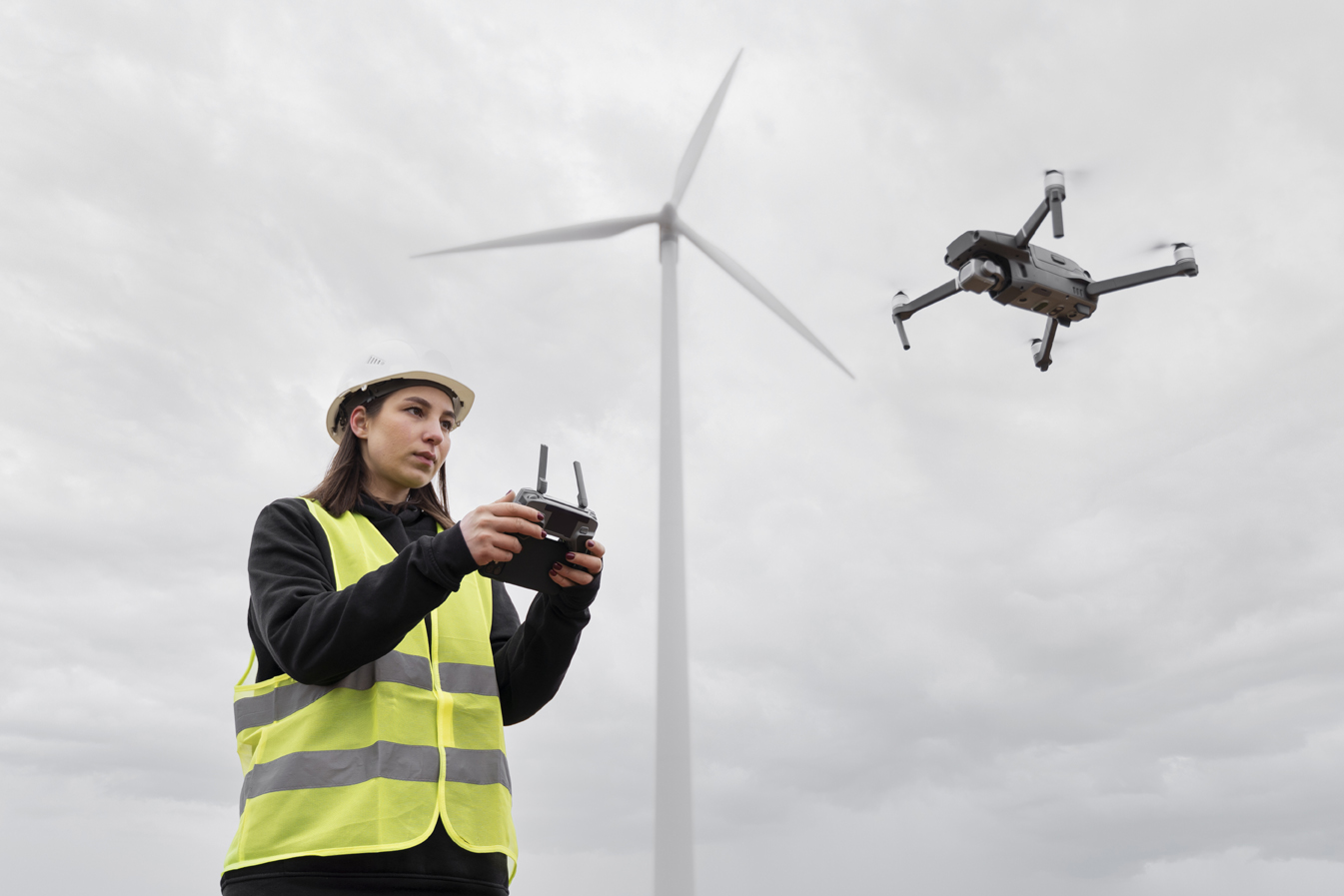 A hum goes through the air – drones on construction sites are no longer an exception these days. As an important part of digitization in the construction industry, they are increasingly becoming standard equipment. In our large guide, we explain all the important questions and aspects relating to the use of remote-controlled missiles in construction projects.

What are drones and what types are used in the construction sector?
A drone is a flying robot that can fly either remotely or autonomously via software-controlled flight plans in conjunction with integrated sensors and GPS. Multi-rotor missiles (e.g. quadrocopters) are usually used on construction sites. These models are characterized by very high manoeuvrability, low weight and high ease of use. However, this is at the expense of range and flight duration.

What legal provisions exist?
Germany: The drone regulation in Germany prescribes different rules, depending on how heavy the aircraft is. In principle, use at heights of 100 m above ground and in the vicinity of residential properties and sensitive areas is not permitted. No permission is required for commercial use. However, to drive a drone weighing more than 2 kilograms, a drone driver’s license must be proven. The competent authority can issue exceptions to the bans.

Austria: In Austria, commercial use is only permitted after registration or official approval. There must be a direct line of sight to the aircraft at all times. If this is the case, flying robots can climb up to 150 meters.

Switzerland: The use of drones in Switzerland is subject to comparatively few regulations. No license is required for commercial use. Unless official approval has been obtained, flying a drone at heights of 100 m or more and without visual contact is not permitted.

In addition, in some countries, it is also relevant whether a drone produces recordings (video, aerial photos). In such cases, privacy issues may become relevant.

How many companies in the construction sector use remote-controlled aircraft?
Digitization in the construction industry has increased significantly in recent years. Especially since the pandemic, this development has accelerated again. A survey in the United States of America found that around 30 per cent of all construction and real estate companies surveyed were using drones in January 2022. In 2020, this share was still around 26 per cent. In countries with particularly modern construction industries, such as the United Kingdom or Norway, the proportion is even higher.

To our knowledge, current and publicly available figures on drone use by industry are not collected in Germany, Austria and Switzerland. Larger companies in particular also use drones in the DACH region. One area in which drones are used to an above-average extent in the German construction sector is the construction and maintenance of wind turbines. For smaller observations on German wind farms, industrial climbers and helicopters have already been largely replaced by drones.

The situation is similar in the mountains of Austria and Switzerland. Among other things, drones are used to assess terrain in the high mountains for new energy or infrastructure projects. Drones made building and terrain inspections in the mountains significantly safer, more environmentally friendly and cheaper. An example of this is the inspection of mountain huts in Switzerland: Due to the hot summer of 2022, the permafrost in the Swiss Alps melted in many places, which endangered high alpine mountain huts from rockfalls and eroding terrain under the foundation. Drones made it possible to inexpensively document damage to closed buildings without endangering anyone.

Controlling the drone yourself or using an external service provider?
Whether it is worth having the flying robots operated in-house or by external partners depends on various aspects:

Processes can be monitored more efficiently and data can be collected more quickly (e.g. are individual construction phases on schedule?)
This allows better planning in advance and during the course of construction projects and enables a timely reaction to current developments (e.g. if defects are identified)
The result: Essential processes in the construction industry are digitized and this leads to significant savings in time and costs
How exactly drones are used on the construction site, however, depends on the project and depends, among other things, on factors such as the complexity and size of the project.

Inspections of structures
Drones have proven to be a valuable addition to building inspections in recent years. Because they offer enormous advantages when it comes to the time-saving and comparatively inexpensive inspection of hard-to-reach places, which previously required the use of scaffolding, ropes, lifting platforms and specially trained personnel.

How well inspections are possible depends on the quality of the camera. Professional drones with high-resolution devices are able to detect millimetre cracks in the building surface from a distance of several meters with a probability of up to 95 per cent. The image quality of drone cameras has greatly improved. In some models, the camera can also be exchanged and, for example, a thermal imaging camera can be installed. It is true that drones with interchangeable or high-resolution cameras have their price. Compared to industrial climbers or helicopters, they are still a lot cheaper because time and effort are saved. Depending on the inspection process, cost savings of more than 70 per cent are possible.

With the right equipment, the potential applications of drones for inspection activities in construction are also growing. For example, the condition of materials can be recorded using infrared thermography. The presence of thermal bridges, moisture and other issues can be discussed in a time-saving manner. Drones that use X-rays to inspect their surroundings are only available as prototypes for the time being.

Drones for construction site safety
Drones can make an important contribution to construction site safety. Thanks to the missiles, potential dangers are often detected visually much more quickly than during an inspection. Moving vehicles, machines, cranes, or active excavation areas are detected in real-time and security officers can react immediately to hazards. Not only does the safety of the employees benefit, but also that of unauthorized third parties who can enter the work area, for example through gaps in the site fence.

The results speak for themselves. According to a survey by DroneDeploy, a provider of drone software, the use of drones increases construction site safety by up to 55%. An analysis by Pricewaterhouse Coopers states that the use of flying robots reduces the number of life-threatening accidents in construction by 91%.

Visualization of the construction site
The image material produced by drones on the construction site can be used in various ways. Repeated flights are used, for example, to record and visualize the progress of the project. Using a GPS function, a flying robot can fly to the same point, enabling before-and-after comparisons. Aerial photos, panorama shots or HD videos not only enable those directly involved in the construction process to gain insights. Used as marketing material, they also give customers and other stakeholders new perspectives and interesting insights.

Aerial photos, panoramic shots or HD videos not only enable those directly involved in the construction process to gain insights. Used as marketing material, they also allow customers and other stakeholders new perspectives and interesting insights. Nowadays, anyone who finds out about various real estate projects around the world comes across drone footage more and more often. Large projects abroad in particular, such as hotel complexes or gated communities, use drone shots to attract new investors, buyers, tenants or holidaymakers on their websites. But the use in the field of construction site visualization is also increasing in the DACH region.

Drone survey
Drone surveying is another common use case on construction sites. Crucial for the quality of the measurement is not so much the missile itself, but rather the camera mounted on it and the software for further processing. It creates so-called point clouds from the recorded images in connection with GPS data. From these, further insights are taken, such as point grids, 3D models, or orthophotos. Some examples:

Volume measurement:
Using the missiles, it is possible to quickly and regularly record the volume of material to be moved. With 3D drone data acquisition, earthmoving processes as well as the removal and application volume can be documented more reliably and economically than with conventional methods. The technology enables even more conclusions to be drawn. For example, how much concrete is still needed for a work process or how many square meters of a roof have already been completed?

Drone Surveying Accuracy:
As technology has matured, drone surveying accuracy has increased significantly in recent years. How high the accuracy depends on various factors such as the flight altitude and the built-in camera. A point accuracy of 2-3 centimetres at a flight altitude of 100-120 meters above the ground is now standard.

Countless work and changes take place every day in construction projects. From a bird’s eye view, all events can be followed in real-time or by means of a before and after comparison. Project managers thus have the opportunity to monitor productivity. For example, you can determine where the ACTUAL deviates from the TARGET, or whether required materials, devices and machines are missing. Since those responsible are less able to carry out checks on foot and more frequently from the office or construction site container, the flying helpers speed up this process considerably. According to DroneDeploy, the time required for site surveillance is reduced by up to 52% .

Communication
Flying robots on the construction site also support internal and external communication. For example, aerial photographs can be annotated or visualized to inform other project stakeholders of potential risks, changes, or other issues. In the same way, customers and other stakeholders gain insight into the current project’s progress. A step that pays off: 2 out of 3 drone users on construction sites say that the images produced lead to more efficient communication processes.

Transport of components and tools
Drones are also occasionally used in construction projects to transport components or tools. Examples are suspension cables of suspension bridges when transport by helicopter or other means is not possible or involves high risks.

Some problems and disadvantages remain
With all the advantages that flying robots bring to construction, there are also some disadvantages or potentially limiting aspects to consider:

Legal regulations
Since the regulations for the operation of the flying helpers differ depending on the location, no general statements can be made in this regard. What is certain, however, is that before using a drone, users should carefully examine the legal framework in order to protect themselves.

Range and manoeuvrability
The range of the drones is limited by the battery. However, since batteries tend to become lighter and smaller, the range of drones has increased massively in the last 10 years. The situation is similar to manoeuvrability, which has become more and more precise, finer and easier. For some construction projects, such as infrastructure projects, a long-range is important. Agility, on the other hand, is the focus for complex projects with hard-to-reach parts. How good the battery and the control of the drone is depended heavily on the model, the price and the manufacturer of the drone. Smaller amateur drones with a camera are available for less than 100 euros. Highly professional drones, which are also used for TV broadcasts, quickly cost several thousand euros.

Payload
The larger the payload of a drone, the more equipment (cameras, sensors) or items (tools, components) it can carry.

Weather conditions
Flying robots depend on good weather. In strong winds and rain, the devices should better stay on the ground.

Related Topics:ARTIFICIAL INTELLIGENCEconstructiondrone
Up Next