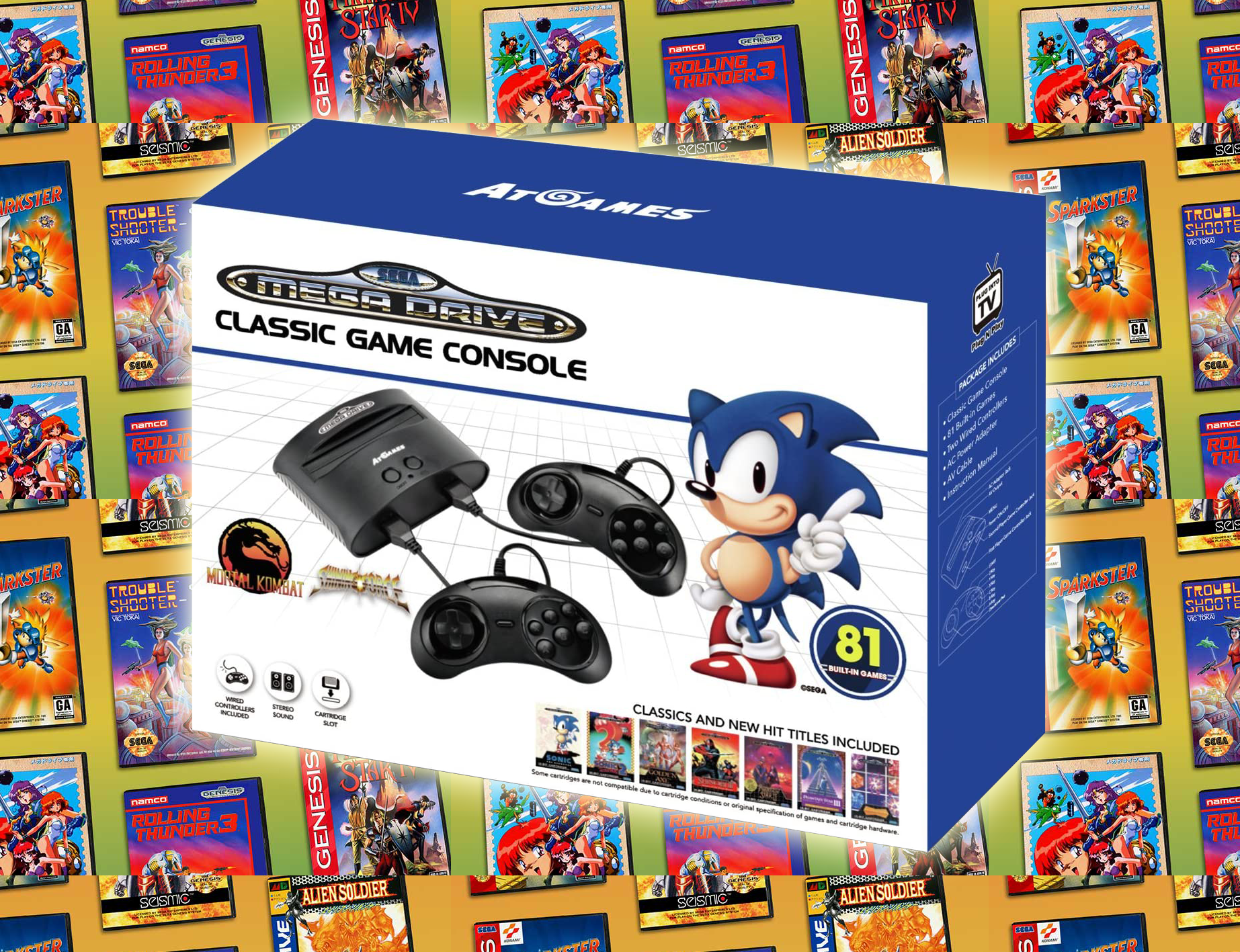 What a surprise. When Nintendo launched its first console in the mini format, the NES Classic Mini, at the end of 2016, it was difficult to foresee that the enormous success of its proposal would unleash an avalanche of launches of compact emulation machines that remain in good shape for six more years. afternoon.

Konami, Taito, SNK, Sony, Retro Games and SEGA are some of the companies that have followed in Nintendo’s footsteps, although they have done so with mixed success. In any case, SEGA must have had the accounts after putting its wonderful Mega Drive Mini on the market. Otherwise, it wouldn’t have launched the console we’re about to dissect.

Here’s a little spoiler: this Mega Drive Mini 2 is a delight, but, like the other consoles in the mini format, it is not essential for all players who want to enjoy the catalogue of what is undoubtedly one of SEGA’s most appreciated machines. Even so, it has several assets that will make it irresistible for many fans of this platform.

The polycarbonate that SEGA has used to make the console enclosure is of good quality. In fact, this is one of the qualities that almost all the official mini format machines that have reached the stores share: they use very decent plastic.

As usual, only the HDMI output and power input reside on the rear. SEGA gives us an HDMI cable and a power cable equipped with USB connectors with the console, although, yes, the adapter to the electrical current is not included. Fortunately, we can use most of the transformers provided by smartphone manufacturers without any problem. Or we can feed it directly from one of the USB ports on our television.

As far as the control unit is concerned, SEGA has given us one of lime and one of sand. The good news is that the pad that comes with the Mega Drive Mini 2 is one with six buttons and it is of very good quality. In fact, it is a carbon copy of the original control. However, and this is the bad news, it only gives us one controller along with this machine and not two as it did with the first Mega Drive Mini. It’s a chore because many of the titles it includes are suitable for two players.

The interior of this mini console is very simple. The printed circuit board that it incorporates is extraordinarily compact, something logical if we take into account that to correctly emulate the games of the original Mega Drive it is not necessary to resort to especially powerful hardware. The cooling of the SoC is passive so the absence of fans allows the console not to emit any noise.

The SoC that SEGA has chosen for this machine is exactly the same that we can find inside the first Mega Drive Mini. And also inside many other consoles in a compact format: Zuiki’s Z7213 . The chip that we can see just below the SoC contains the 512 MB of main memory that this machine has, and its secondary storage has 8 GB of capacity, so it doubles the RAM of the first Mega Drive Mini, and also exceeds its secondary storage.

The interface of this console is convincing, although its CRT filter can be improved
The pre-installed software on this machine is very similar to what SEGA offered us with the first Mega Drive Mini. The interface is friendly and allows us to effortlessly find the title we want to play. Additionally, we can sort your catalogue using several different criteria. We can put the Mega-CD titles first. Or sort them alphabetically. Or classify them so that we see their spine, and not the cover, among other options.

Here’s some great news: this console gives us no less than sixty games, and many of them are true classics that are still very enjoyable. Twelve of these titles belong to the Mega-CD, forty-one are part of the original Mega Drive catalogue, and the remaining seven are games never released on the original machine that we can now enjoy for the first time. Here you have them listed in full so you can see how this console spends them.

Like its predecessor, the Mega Drive Mini 2 allows us to keep the original aspect ratio of games, or “stretch” them to fill the screen of today’s 16:9 aspect ratio TVs. If we press the C button on the remote we will activate the CRT filter, although, as we will see later, it has not convinced us.

Another interesting option that this machine puts in our hands if we decide to keep the original aspect ratio of the games is to decide which wallpaper we like the most. There are not many options, but some of them are very successful.

When it comes to sound SEGA has spun fine. And it is a huge success. It allows us to decide which audio we like better: that of the original Mega Drive or that of its successor. The sound chip on these consoles was slightly different, so it’s worth trying both options in order to enable the one you like best. I prefer the one from the Mega Drive II, but the one from the original console is great too. It goes in tastes.

The emulation of the Mega Drive Mini 2 is not perfect, but it is very neat
The gaming experience offered by this mini console is great. The emulation is not perfect insofar as the graphic finish is not identical to that of the original machine. And their sound is not exactly the same either. But they are very similar. In fact, they are so similar that it is necessary to face both machines head-to-head to identify the differences. The emulation of the first Mega Drive Mini was very good, and that of its successor is of the same level.

It’s great, but it has, in my opinion, a problem: it darkens the image a lot. All filters of this type cause a clearly perceptible darkening of the image, but the one on the Mega Drive Mini 2 is especially severe, so I prefer to ignore it. In any case, it is worthwhile for each user to draw their own conclusions from it.

Let’s go now with another important feature: latency. The emulation of this machine carries a small latency, something that also happens in the original Mega Drive Mini. In most games, it doesn’t bother us in the least, but in some titles, such as fighting games, this delay has a perceptible impact on our experience, so it can be off-putting for the most demanding players. It is worth keeping in mind.

As I mentioned above, the sound of this mini console is not identical to that of the original Mega Drive or its successor. Still, it looks a lot like it. And it is absolutely enjoyable. It’s nice to listen to the fast-paced music composed by Yuzo Koshiro for the eternal ‘Streets of Rage 3’.

Latency is perceived more clearly in ‘Super Street Fighter II The New Challengers than in other games (in platform games it doesn’t usually bother the least). Even so, this title is perfectly playable. And it remains, in my opinion, one of the best instalments of this saga.

There goes another success of SEGA. As you can see in the following image, some games allow us to choose which ROM we want to run. For example, in ‘Sonic The Hedgehog CD’ we can opt for the European or the American version.

‘Sonic The Hedgehog CD’ is one of the great classics that this console offers us, and that is worth, not overlooking. It seems unbelievable that so many titles from the 80s and 90s withstand the passage of time without flinching in the least. This Mega Drive Mini 2 offers us some of these games.

Here are some titles included in the Mega Drive Mini 2 that we suggest if you decide to get hold of it and you haven’t played them yet: Final Fight CD, Robo Aleste, Shining Force CD, Sonic the Hedgehog CD, The Ninja Warriors, Alien Soldier, Ristar, Rainbow Islands Extra, Streets of Rage 3, Super Street Fighter II The New Challengers, The Revenge of Shinobi, Virtua Racing, Space Harrier II… There are many other games that are still very enjoyable, but this selection is a good starting point. departure.

SEGA Mega Drive Mini 2: Xataka’s opinion
Mini consoles are not recommended for all gamers. This particular one is not cheap (it costs 109.99 euros ) and incorporates a single control knob, so it is reasonable that some players prefer to opt for other options that put in their hands the possibility of enjoying the titles of this platform for less money and with an overall experience at least as pleasant as the one offered by the Mega Drive Mini 2.

However, this does not mean that this machine is not attractive. It is, and a lot, but not for all players. Those who collect consoles in the mini format, those who prefer to enjoy the Mega Drive catalogue in the simplest way possible, and those who also value how careful the emulation of this machine is, will enjoy it very much. Of that, there is no doubt. Of course, the available units will probably disappear soon, so it is worth not getting lost in order not to fall into the clutches of speculators.