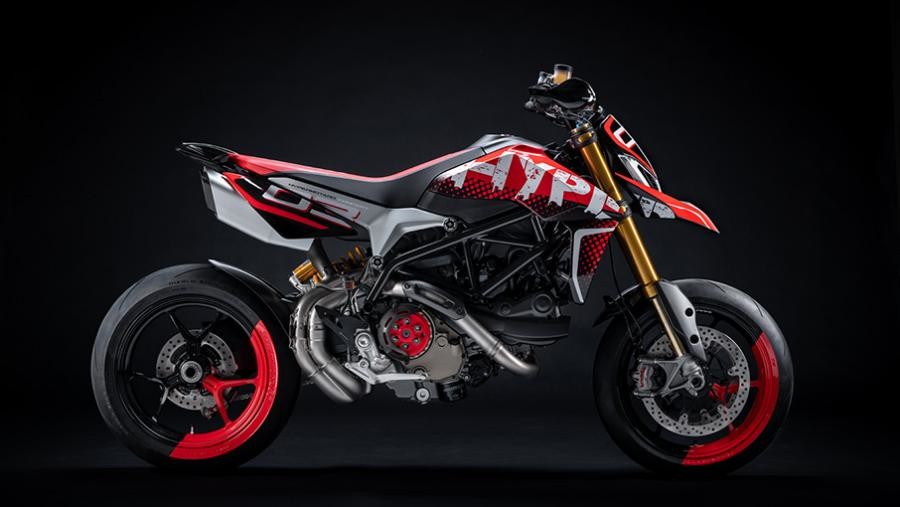 Since 1929 and for 90 years it has been held in Cernobbio (Italy), on the shores of Lake Como, the Concorso d’Eleganza Villa d’Este . Those attending the luxurious event have been able to admire year after year very exclusive cars and motorcycles, both classic and prototypes that could advance a new production model.

Among the different categories that exist in the concuso, one is that of motorcycle prototypes , called ‘New designs and prototypes made by independent manufacturers and brands’. Ducati was the winner this year, ahead of the MV Agusta 800 Superveloce with a spectacular prototype: the Ducati Hypermotard 950 Concept .

A Hypermotard 950 with the same mechanics, but better dressed

The Design Center of the house of Borgo Panigale has been commissioned to bring to reality this prototype that starts from the base of the Ducati Hypermotard 950 that we tested a few months ago . It uses the same mechanical heart of 937 cc and 114 bhp at 9,000 rpm , although the exhaust is different from the series, like the subframe, which instead of using the multi-tubular structure, uses a single piece. Despite these changes what really changes on this bike is the appearance, especially in the paint .

Stands out above all the red color combined with the graphics that are distributed throughout the bike. The word “Hyper” runs through the entire part of the tank with white letters and pretend to make a nod to the world of racing. In the part of the tail the Ducati continue with the same idea with the large number “03” that appears under the words “Hypermotard Concept.” The same number also appears on the front, above the headlight.

The red is also added to a part of the rim and tire in addition to the clutch (dry in this version). In the seat , which is black in series, also highlights the color red and in the middle of it, with large white letters appears the word Ducati .

Since 2002, the prototypes, like this one from Ducati, have become part of the Concorso d’Eleganza Villa d’Este as one more category. Borgo’s team did not start from scratch this year as they came with some experience from previous years : in the 2017 contest the Italian brand participated with two bikes that used the base of the Ducati Scrambler Cafe Racer and the Scrambler Desert Sled .

They were also made aesthetic modifications and retained the mechanical part. At that time, the first one obtained the first prize in the design of motorcycle prototypes . The Desert Sled for its part was in third place in the same category.

In addition to the prototypes, many other bikes could also be seen in the Italian competition of 2019. They were organized by classes from A to E and also for different decades of the 20th century . The oldest motorcycles that could be seen this year were a single-cylinder Holcroft of 213 cc in 1901 , an Achilles-3 1/2 PS of a cylinder and 500 cc of 1904, and a 362 cc tetracylinder FN built in 1905.

The most sincere Marc Márquez: “I worry zero to be at peace with Valentino Rossi”

Skids, jumps and accidents duet on a motorcycle